Connect Pipedrive and MailerLite via web interface in 5 minutes, without programmers and special knowledge.

Create integration of Pipedrive and MailerLite yourself, without programmers

Automation capabilities of
Pipedrive and MailerLite

Configure the rules once, according to which the systems will work.
Transmit data at specified intervals from Pipedrive to MailerLite. 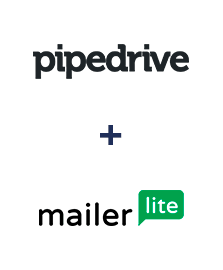 F.A.Q. on integration of Pipedrive and MailerLite

How is integration of Pipedrive and MailerLite carried out?

How much does it cost to integrate Pipedrive with MailerLite?

At the moment, we have 181+ integrations beside Pipedrive and MailerLite

Pipedrive is a CRM system focused on building a sales funnel. According to the founders of the project, its services are already used by about 90,000 companies around the world. Pipedrive is an effective sales management tool for any project based on visualization of all stages of the sales funnel. The platform offers tools such as web forms, a customizable virtual chat partner, communication management features, recommendations from the built-in sales assistant, tools for maintaining a customer base, and more. The service can also be used using mobile applications for iOS and Android. More

MailerLite is a SaaS email marketing solution that has been on the market since 2010. The number of its users, according to the company itself, has already exceeded 780,000 thousand, and the number of emails they send has reached a billion a month. Among the MailerLite tools are an email constructor that allows you to create letters from separate blocks on the principle of a constructor, the ability to create landing pages, customize pop-up messages, ample opportunities for managing the subscriber base and personalizing subscriptions, as well as analyzing campaigns. More