Connect Notion and Pyrus via web interface in 5 minutes, without programmers and special knowledge.

Create integration of Notion and Pyrus yourself, without programmers

How to integrate Notion and Pyrus
with ApiX Drive

Now you do not need programmers or integrators to automate Notion and Pyrus.
With ApiX-Drive, you can connect and automate the operation of these systems in 5 minutes by yourself
Select the online systems to be linked
Specify the actions between systems
Turn on auto-update
The setup will not take more than 5 minutes.
Registration

Automation capabilities of
Notion and Pyrus

Configure the rules once, according to which the systems will work.
Transmit data at specified intervals from Notion to Pyrus. 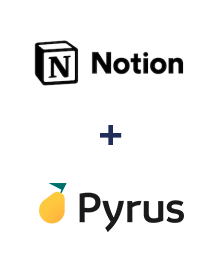 F.A.Q. on integration of Notion and Pyrus

How is integration of Notion and Pyrus carried out?

How much does it cost to integrate Notion with Pyrus?

At the moment, we have 149+ integrations beside Notion and Pyrus

Notion is a platform for managing tasks and projects, as well as organizing teamwork. It has a block-based editing structure that helps distribute content across blocks of memory: text, links, images, lists, code, etc. Using Notion, you can create a knowledge base for a project (team wiki), as well as nested and checklists, roadmap and calendar templates, and there is also a task scheduler. Among other tools of the service, it is worth noting kanban boards, a web clipper for saving any web content, as well as options for managing snippets. More

The Pyrus online service is used to automate the workflow and business processes of client companies. According to the creators of the platform, more than 250,000 users have already used its services, and the number of business processes that have been established with the help of Pyrus has already exceeded 82,000. The platform specializes in creating a task setting system, as well as managing workflows and workflow for business users. ... The service can be integrated with third-party systems, including CRM and ERP systems, which are already used by the company. More